"MODAL SINGING: A JOURNEY WITHIN SOUNDS"

The main purpose of the workshops is to cultivate awareness of modal chant. The progressive work starts by singing a drone and intervals of unequal temperament leading the participant to learn Armenian liturgical chants by means of listening and memorization. The Centre’s workshops are for all persons interested in being initiated to the world of musical modes, whether they are Armenian speakers or not, and whether they are amateur or professional musicians. The proposed work has a double aspect: proper vocal work which allows the participant to discover a natural voice involving the whole body, and modal work which begins by discovering natural intervals that are not heard anymore in contemporary urban life. Under this apprenticeship, the participant learns to consider a melody within the framework of a mode, i. e. a sound environment, and not as a succession of notes or motifs. Thus, the participant is encouraged to discover the diverse interval genres and species, and then the modes they constitute on the basis of natural tetrachords. Chants with limited lyrics are taught in this perspective.

Aram Kerovpyan was born in Istanbul. As a youth, he received liturgical chant training in the Armenian Church. He learned to play the kanoun and studied the Middle Eastern music system with master musician Saadeddin Öktenay. In 1977, he moved to Paris where he devoted himself entirely to music, playing with various Middle Eastern musicians. In 1980, he joined the Ensemble de Musique Arménienne that later became Kotchnak. From this date on, Armenian music became his principle field of research, particularly the modal system of liturgical chant. In 1985, he formed Akn, an ensemble of Armenian liturgical chant. Parallel to his activities as a musician, Aram Kerovpyan participates in conferences, lectures in Europe and in North America, publishes articles and does research in the field of Armenian modal music theory. He is a doctor of musicology. Since 1990, he is the master-singer of the Armenian cathedral in Paris.

Virginia Pattie Kerovpyan was born in Washington, D.C. While in the USA, she studied singing and sang in a number of choirs and early music ensembles as both chorist and soloist. Upon her arrival in France, she continued her voice studies at the École Normale Supérieure de Musique de Paris and at the Conservatoire National Supérieur de Musique. Virginia Pattie Kerovpyan has performed and recorded with early music ensembles such as Les Arts Florissants, Ensemble Guillaume de Machaut de Paris, Per Cantar e Sonar, l’Offrande Musicale, La Grande Écurie et la Chambre du Roy. In 1976, she formed with Rouben Haroutunian the duo that would later become Kotchnak, and in 1985 helped to form the ensemble of Armenian liturgical chant Akn, of which she is the female vocalist. 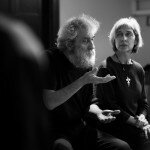