Subject to_change is an artistic duo Abigail Conway and Lucy Hayhoe, two graduates of the Department of Drama and Theatre at Goldsmiths College in London. They are particularly interested in the phenomenon of shifting and changing reality within the frames of the so-called durational performance. The audience is enabled and encouraged to partake in its transformation through their encounter with it. The work takes the audience on a journey that is centered around a particular activity. This activity asks them to leave a trace of themselves in order for the artwork to live. In this way, they create a temporary, dynamic and socially engaged communities. Installations invite the audience to celebrate their individual participation. Home Sweet Home is an invitation to build utopian Szczecin. Here Szczecin will be invented from scratch. A new city in miniature will be constructed from creative ideas of spectators/participants and cardboard sets. The project includes a large-size mock-up where everyone can let go of their imagination. Finally, it is possible for you to build yourself your own villa by the Oder, to materialize an idea for a small business in the city center or to reconstruct your own tenement house in Old Town. Owners of constructed buildings will receive keys. They will create their own contribution to the city, and after a few hours, or the next day , they can go back and see how their building affected the city, how not only new houses, but also new environment are being created: the latest news can be found on the bulletin board or are announced by radio, the postman distributes letters from new neighbors, and the whole city celebrates the street festival. Home Sweet Home is an invitation (for anyone of any age) to try out together how we want to live in the future, how our dreams can coexist with reality, how they can change it.

The action be is scheduled for June 28th-29th in the DB Port hall. Its results - in the form of an exhibition - will be taken to the Pomeranian Library and will be presented throughout the entire duration of the festival (since July 5). 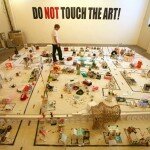 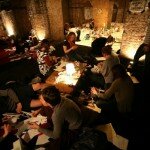